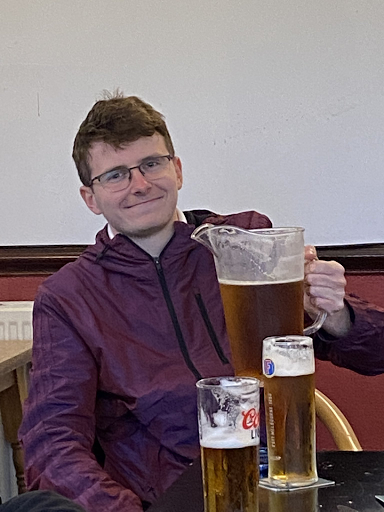 On a dank and dismal day at the O.C.G., a day where the pitch was only playable thanks to the heroic dedication of the ground staff, the oh so solid crew of Stephen Bexfield and Ian Laidler, Jamie Cummins produced a career-best performance to set up a 100-run victory over Luton Town & Indians.
Offley batted first and unleashed a new opening partnership in the form of the No Twos, No Chance duo of Josh Hook and Ali Shah.
A patient 50-run partnership laid the groundwork and provided a platform for the middle order to exploit after Ali went for 17.
It didn't quite work out that way despite Ben Wiles reaching double figures for the first time since the opening match of the season,
Hassan made a typically swift contribution to the scorecard before Mark Tattersall fell first ball to a full toss, a dismissal that moves him into a share of a five-way lead for the coveted duck award.
Surprisingly one man who is not tied for the lead in the duck stakes is captain, leader and legend Scott Boatwright. The skipper sallied forth desperate to improve on a league average of 2.83.
By the time the dust had settled the league average had unfortunately dipped to 2.57.
This latest dismissal for a single has not necessarily seen the Bold Boaty - The Throwback - cast adrift in shark-infested waters but his average is now bobbling along with the likes of Desmond from Jesmond and Mad Max himself, John Davis.
Josh Scott, fresh from his worst day in an Offley shirt (can't think many have had worse ones than 9-0-54-0 and a second ball duck) cracked 23 before he was run out for at least the second time this season, possibly the third.
Hook remained unbeaten at the other end, again showing his ability to concentrate for long periods and finished undefeated with 61 as Offley closed on 170-6.
The visitors were soon in disarray. Cummins, chugging in through the gloom like a rusty engine on the Snowdon Mountain Railway, offered up a wide delivery that seemed to be obligingly guided over the slips before Tattersall leapt skywards, putting the hand that has caught the eye of ten thousand barmaids to good use to haul in the catch.
Moments later the second wicket went down. Former Offley all-round Mohammed Qumar strode out at number three and looked to get off the mark with a quick single to mid on. This ended with Qumar having a frank exchange of views with the non-striker from about two feet away as the ball was gently relayed to the other end where Boatwright removed the bails leaving Qumar to stomp off having been run out by 22 yards.
Fortunately Captain Dan wasn't on hand to get any ideas to add to his arsonist's arsenal as he contemplates new ways to torch his own batting order.
The only stand of note threatened to revive Luton Indians' hopes but when Cummins tailed one back into earn an LBW decision they were three down and fading fast.
Moments later it was four down and Cummins was on the hat trick after rearranging the stumps.
Boatwright brought the field in and even though Cummins was bowling with pace and generating decent bounce the skipper decided now was the moment to stand up to the stumps.
Cummins ran in, delivered, found the edge and Boatwright dived to his right but got nowhere near it as it brushed his arm and the chance was gone.
Tattersall also dived but he didn't get to it either.
Tragically a fine performance from Cummins was marred by a performance worthy of a fine from the skipper and chairman.
Undeterred Cummins was soon back in the action as he claimed a fourth wicket before going in search of a priceless fifth.
When it came it was not a classic fast bowler's wicket.
It did not seam away at the last moment to take the edge.
It did not swing in to clip the top of off stump.
Nor was it a vicious yorker that uprooted middle.
Perhaps, appropriately, it was a fairly juicy pie that was swung away to the deep midwicket boundary where Wiles made a difficult chance look very simple as he clung on to the soggy ball.
Cummins had never taken more than three wickets in an innings before but finished with 8-0-25-5 to shatter the opposition resistance.
As the rain continued to fall the tail subsided before Kaiz Ul-Haq completed the rout as Offley won by 100 runs.
The result lifted Offley back into second place, one point ahead of Steppingley who they face next week in a contest which will determine whether July and August will be the stage for an Offley promotion push or whether the summer will be all about mid-table mediocrity.