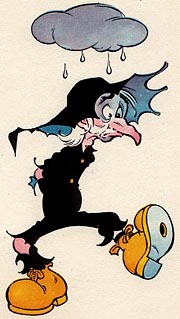 What to say about Ian Laidler, a man whose very face shows that there must be a solution to the Middle East Peace Process as he combines the finest features of American Pie's Mr. Levenstein and a slightly flustered Turkish waiter?

Laidler made his debut for the club in 2015 before becoming a regular in 2016.

He subsequently served as club treasurer before enrolling in the Steve Bexfield Groundskeeper Academy and undertaking his current roll as junior pitch consultant.

Laidler arrived from the charred wreckage of Crawley Green Nomads under the impression he was a plucky yet limited third change seam bowler.

After undertaking the Offley initiation course Laidler was delighted to realise he had been reclassified as a plucky yet limited all-rounder with opening bowler pretensions.

To be fair Laidler is seldom delighted about anything for long - like Private Frazer he's generally at his least discontented when things are unraveling and he can revel in the fact "We're all doomed!"

Laidler's favourite moment occurred at Billingborough on Easter Sunday in 2017 when Offley's openers walked out in pursuit of 286, with Darren Lunney telling Mo Chaudry, "Let's take our time and see where we are at drinks."

To Laidler's never-to-be-forgotten delight by the time the drinks were scheduled we were already in the pub after being blown away for about 80.

Laidler has taken 47 wickets for Offley, often armed with the new ball and a pleasing customer-friendly attitude designed to make the opening batsmen feel as comfortable as possible at the crease.

He's not known as the Maitre D' for nothing and some batsmen have even left reviews on Trip Advisor complementing him on the warmth of his hospitality and friendly service.

A hard-working trier in the finest tradition of English trundlers, Laidler will often be found running uphill into the wind, arms and legs pumping in a symphony of uncoordinated effort.

Laidler is often his own harshest critic and is a much better bowler than he gives himself credit for.

He's certainly a much better bowler than the teenage batsman at Sandford gave him credit for when he was effortlessly flicking him into the adjacent fields.

Laidler's final delivery that day came to rest in a cow pat, prompting a brief delay while the ball was cleaned of bovine excrement and leading a peevish bowler to announce his retirement.

He averages a shade over 10 with the bat, an average that would be higher but for a propensity to offer no shot to straight balls and an insistence on invariably unfurling an extravagant cover drive regardless of where the ball has pitched.

His greatest day as a batsman - one that he will never tire of describing in ball-by-ball detail to his wife Lou - came against Stevenage in 2017.

Laidler smashed 10 boundaries in his 52 to set up a comfortable win, flaying the attack to all parts and enjoying himself in a manner that suggested he was facing his own bowling.

A tenacious and committed fielder, Laidler once took one of the greatest catches ever seen at Offley, a sprawling effort on the long on boundary in front of the crowd drinking in the clubhouse.

Unfortunately he was playing for Nomads at the time so Yip De fucking Doo....

Did You Know: Laidler was such a big hit with the ladies during his time at university he was known as Laidless.