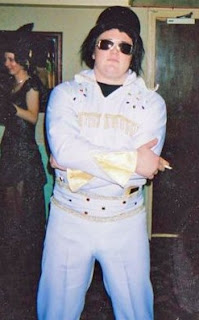 Once upon a time Mark Tattersall was young, reckless and mobile.

These days he is older, wiser and more responsible and to be honest his mobility is of the kind customarily associated with scooters.

Over the years he has made the transformation from young tearaway to elder statesman and is now the chairman of Offley & Stopsley Cricket Club.

Let that percolate for a moment; Mark Tattersall is our moral compass.

Mark has also demonstrated a flair for organisation that has resulted in tours all around the world and is the brains behind the club's annual money spinner, the Offley Sixes.

In a sense he has become the new Simon Warrington. That observation should impress him about as much as asking him to wear a Tottenham shirt.

Just as at closing time at the bar he is invariably closing in on a double Jack Daniel's Honey, on the pitch he is closing in on the double of 5000 runs and 300 wickets.

The youngest player in club history to score a century, Tattersall's batting remains an uncomplicated combination of biff and block where his celebrated golf skills routinely send the ball soaring over the ropes with an effortless flick.

He no longer approaches the crease with the same verve with the ball in hand as he once did (should he now try to reprise his "Malinga" delivery where he waved his hand to disrupt the batsman's concentration, there would be genuine concern he was signalling for urgent medical assistance) but he can still generate impressive swing.

In the field he has firmly established himself as part of the "catches what he gets to" fraternity while his ability to chase down a ball is threatening to reach the tragic level.

A member of the team that won Offley & Stopsley's first trophy in their inaugural 1998 season, Tattersall is still one of the first names on the team sheet, a name that can still occasionally strike fear into the hearts of opposing bowlers and a name that can always spark happiness in the hearts of pub landlords.

Did You Know: Mark's charmingly naive wife Rachael used to think winter nets were held outside in February. At night.