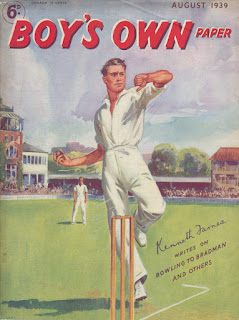 An original Stopsley player, mild-mannered swing king Steve Denton returned to the club in 2013 after a lengthy sabbatical from the game.

Stevie D may be nearing 60 (years not miles per hour) but he retains the same action and almost the same pace he once possessed three decades ago.

Steve is a throwback to a more genteel time when pace bowlers trained on pints, didn't believe in fielding and daubed their hair with brylcreem.

Denton makes no secret of the fact that he would prefer not to open the bowling but a succession of captains have cheerfully ignored this, opting for his miserly line and length and ability to bowl tight spells up front.

The risk of his arm falling off means he invariably bowls his allocation in a single spell.

He recently passed the 150-wicket mark and has career-best figures for Offley of 7-38.

Despite the wickets he is best known for his economy.

Tighter than a Dan Goord single, almost a quarter of Steve's 1100 overs have been maidens and he boasts an economy rate of 2.65.

Although he has bowled nearly as many maidens (260) for the club as he has scored runs (267) he is an underrated batsman - most notably by himself - and is always prepared to dig deep for his partner.

Admittedly there are times when he knows the game is up and is happy to throw his wicket away in order to get to the bar quicker.

Steve generally tries to stick to his favourite two shots, the block and the nurdle.

Recently he attempted to add the paddle sweep to his repertoire but this was shelved after he deflected the ball into his teeth.

In the field Steve is invariably positioned at fine leg or on the 45 in an optimistic and invariably forlorn bid to cut out the single.

He will openly admit that fielding is not his strongest suit; if his bowling is an elegantly-tailored evening suit and his batting is a jaunty safari suit, Steve's fielding is definitely a gimp suit.

Judging by his fielding standards Steve may be the least likely man in England to catch Covid but he has occasionally pulled off a remarkable catch, most notably a one-handed effort off his own bowling at Lancaster Avenue.

He also once ran out a batsman with a swooping pick up and throw - that man has no idea how unlucky he was.

Did You Know: According to another website, Steve took 55 catches for Stopsley in 1995. Despite making just 12 appearances!