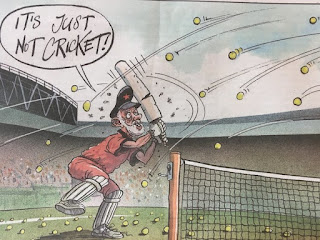 These are just some of the attributes that Peter Gilkes has brought to the Offley ranks since his debut at the back end of the 2019 season.

He missed the start of the season after falling victim to a particularly virulent bout of wide Covid but made his comeback when Offley found themselves a man short moments before the start against Harpenden Dolphins and heroically abandoned his pint at the bar to open the bowling.

Gilkes might not be the quickest bowler on the village circuit but when it comes to consistently baffling opening batsmen with a variety of different deliveries, the left-arm leftie has few rivals.

If Gilkes existed in the wild he would be a David Attenborough wet dream, the oh-so-rare Bearded Praying Mantis.

His modus operandi involves cunningly luring batters into a false sense of security with a healthy dose of floated dross before baring his fangs and striking suddenly with a vicious in-swinger.

He was the star performer in the plague-ridden 2020 campaign where he claimed 21 wickets - no one else managed more than 10 - and recorded career-best figures of 5-10 at Caddington.

That performance was described by witnesses as tantamount to stealing sweets from blind orphans and then ushering them back inside before torching the orphanage for the insurance money.

Considering that Gilkes took more wickets in a single spell than all but six other so-called bowlers managed in the entire season, it could be argued that we could have done with encountering a few more blind orphans...

Unfortunately for Gilkes no official bowling trophy was presented that season so he had to make do with buying one himself.

Some of his strokes are unique to him and appear to have been borrowed from other sports such as lumberjacking and his crouching, swinging technique is not dissimilar to a man throwing the frying pan rather than the kitchen sink.

17 trips to the crease have produced seven ducks (in 2020 he tied for the lead in the duck stakes with three alongside those other batting leviathans Kaiz Ul-Haq and Matty Taylor) and come the end of year awards night Gilkes may yet be grateful that Covid prevented him from getting on the field at the start of the 2021 season.

Remarkably, despite his customary penchant for flailing away with the willow like a blind gibbon hacking at a pinata, he does have a top score of 28.

Considering his other 16 innings have produced the grand total of 53 runs, it may be just as well the drug testers weren't on hand after his remarkable knock at Shenley. Offley still got annihilated but Gilkes went down with all guns blazing on a day when the rest of his teammates simply opted to turn their guns on themselves.

As far as it is possible to ascertain (and the 2020 scorebooks are admittedly a little hazy on the subject) Gilkes has yet to take a catch for the club.

Did You Know: Peter and his friends John and Roger are known as Offley's Three Musketeers, in honour of Alexandre Dumas's three legendary swordsmen, Athos, Aramis and Porthos, a happy-go lucky trio of hard-drinking carousers.

Athos, Aramis and Porthos were rather more proficient with the blade than Offley's Three Musketeers. 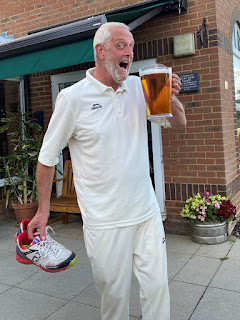