Pointless? Almost But Not Quite..... 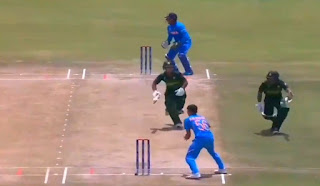 It would be unfair to describe Offley's trip to Old Warden as pointless - after all the Covid-ravaged outfit mustered a point for their efforts.
That being said, it was not one of the more glorious days in the club's history as they slumped to a fairly comprehensive defeat against their previously bottom-of-the-table hosts.
Things began rather well. Stand-in captain Richie Barker won the toss and elected to bat and Darren Lunney and Josh Hook plundered three boundaries from the opening two overs.
The pair put on 18 for the first wicket with no real alarms before Hook edged behind.
Marc Ward joined Lunney and dominated a partnership of seven before he was bowled for 6 to leave Offley on 25-2.
John Davis walked out to join Lunney and at that stage you would have got excellent odds on Davis standing at the non-striker's end while the next four wickets fell, even allowing for his dedicated extra net sessions.
Quite.
Lunney and Davis took the score up to 33 before Lunney's feeble prod to slip precipitated a disappointing collapse as Offley lost four wickets for three runs.
Luke Munt went first ball as he edged to slip, the ball looping up off the shoulder of the bat as he pushed tentatively at the ball.
The dismissal was particularly disappointing as the last thing he said before setting off for the middle was not to push tentatively at the ball.
Munt was adamant this was the first golden duck of his career.
Anyone who has seen his previous two dismissals may find this highly unlikely.
Kaiz Ul-Haq chipped in with 3 before slapping one to mid off and then Peter Gilkes, promoted to number seven in the optimistic belief he might hit the bowlers off their length, lobbed his first ball to cover.
The People's Captain joined Davis and they added (in the context of the innings) a useful five runs before a Goordesque breakdown in communications resulted in Davis hurtling down the wicket like a startled Usain Bolt with dynamite up his arse after Barker hit the ball directly to the fielder at mid off.
Davis was unable to regain his ground, narrowly run out by about 15 yards, and Offley slumped to 41-7.
Ian Laidler entered the fray and offered valuable support as the eighth-wicket produced the highest stand of the innings, adding 19 before Laidler gloved a catch to the keeper for a well-constructed 2.
Steve Denton, no stranger to epic collapses down the years, joined his captain on the burning deck and played his part in a stand of 27 priceless runs.
Denton probably played more than his part which in the final reckoning constituted of merely an alleged 6 runs on account of a certain scorer (whose name rhymes with Dark Board) misplacing a couple of boundaries.
The People's Captain was the ninth man out, caught on the midwicket boundary for 37 before Denton was the last to go for 6 (possibly 14) as Offley were dismissed for 92.
Offley needed quick wickets and although Gilkes struck early with a classical in-swinger they were soon up against it.
Laidler produced a determined spell as he charged up the slope into the breeze, knees and arms pumping like a spastic trying to smash ants with his elbows, finally earning the wicket he richly deserved when he induced a loose drive to mid off and Denton clung on at the fourth attempt.
An excellent stumping by Hook gave Sanket Vaidya his first wicket of the season but another breakthrough failed to materialise.
Lunney, a woodworm-addled sideboard with dodgy hands at cover, dropped a sharp chance off Laidler's final delivery and Vaidya failed to cling on to a low return catch.
On the whole it's fair to say we've had better days although despite the result it was a thoroughly enjoyable day out and a game played without aggravation of any sort.