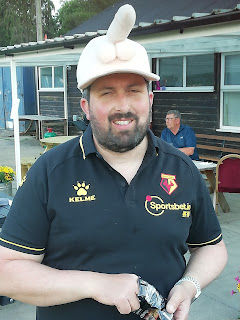 Many years ago, at the height of the hostilities between Offley and Nomads, someone (and despite what has been suggested down the years it wasn't me) coined the phrase Luke Munt Watford Cunt.

If one considers the photographic evidence above we see a man wearing a Watford top and a hat with a penis on it.

He does indeed look a bit of a cunt.

Yet a lot of water has flowed under the bridge since the early days when Offley came into Munt's orbital sphere.

He's the size of a planet so why shouldn't he have his own orbit?

It's a slightly moot point as to whether the water would be able to flow under the bridge if it was trying to transport Luke downstream - as like as not his imposing girth would make it difficult for anything to get under the bridge.

In 2015 Munt made the switch from Nomads (via Hexton) and joined Offley.

Since then he has scored over 2000 runs for Offley, taken nearly 50 wickets and pulled off a number of fantastic catches that belie his size and lack of speed.

There may be times in the field where he resembles a slightly portly panda but he rarely drops the ball once he gets in position to catch it.

Need anyone be reminded that while his days as a distinguished long distance runner may be behind him, he still had the pace to beat Josh Hook in a sprint several years ago.

Despite his fielding and bowling, Munt has made his real mark as a batsman.

Cynics might argue he has yet to make his mark as a real batsman but that would be unduly churlish - it's not as though he always tries to cut the ball off middle stump first ball.

An attacking player, always willing to live and die by the blade (let's hope he doesn't lean on it or he might do himself a nasty injury), Munt's game is based around the cut and the cover drive and the occasional short-armed jab.

He has the ability to look a fantastic player but will then often do something particularly stupid - often in the space of consecutive balls.

In the days when he played against Offley he would routinely hammer Colin Keeley for a couple of boundaries through mid off before lobbing a catch to the same fielder shortly afterwards.

In fairness it should be pointed out that the day he earned the Watford Cunt sobriquet he hit Keeley for more than a few boundaries as he hammered the bowlers to all parts while wearing a Watford away shirt.

Munt has form when it comes to sporting interesting colour combinations on the field - earlier this season he made an unbeaten half-century while resplendent in the royal blue of Luton Bowls Club.

While he is blessed with timing and power, he remains the master of the soft dismissal and if you're looking for a batter to tamely chip a return catch to the bowler, lazily miss a cut off a ball pitching middle and hitting middle or gormlessly waft a catch to cover, Munt's your man.

Despite his dubious background he was elected captain in 2016 and remains the last man to lead a team to promotion without the artificial stimulant of Azeem Ansari.

On a day when almost everyone showed a willingness to die for the cause and their captain, Munt's men memorably clinched promotion in the rain to scale the lofty heights of Division 8B.

In 2021 Munt was banned from bowling on medical grounds, a decision that prompted an outpouring of grief among the batsmen of Bedfordshire and Hertfordshire at the prospect of his assortment of lobs and pies disappearing from the menu forever.

Munt is destined to go down in history as one of Offley's greatest signings and represented something of a two-for-the-price-of-one bargain. The year after his arrival he coaxed his great friend Ian Laidler to make the switch and there's no arguing with the fact that Offley have benefited enormously from the efforts of their very own Wallace & Gromit.

Eight seasons on from his debut for the club Offley's rambling gambling man continues on his merry way, blending boundaries with bloopers and rarely conveying the impression that cricket is something to be taken too seriously.

Unlike the very serious business of collecting coins...... 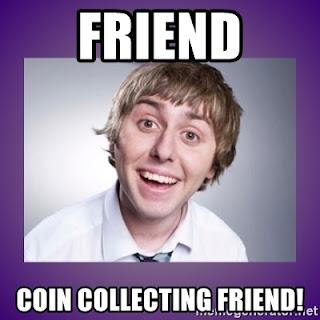 Did You Know: After a sporting career that has featured success in the art of long distance running, football, cricket and even occasionally golf, Luke discovered true sporting utopia when he discovered a natural talent for lawn bowls.