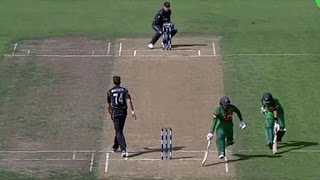 Even before Ben Wiles barbecued the tail in the final over at Langford for the greater good, OSCC had been racking up the run outs with aplomb this year.

There have been some absolute classics, ranging from Luke Munt's lemming-like suicide at Harrold to Kaiz Ul Haq's gormless attempt to get off the mark at Gaddesden and of course perhaps the moment that eclipsed all others, the likely skirt of the year debacle at Aldenham featuring Messrs Hook and Bexfield.

The latter incident was particularly impressive as all that was at stake was a leg bye.

Run outs are nothing new for Offley.

And speaking as someone who has probably survived more of them than any other batter in Offley history I should know.

The club's debut season saw the little incident at Wardown Park where the entire middle order was decimated in a succession of misadventures that culminated in four run outs and left the man who survived all four incidents feeling that somehow or other he might have been somewhat culpable.

On another occasion the splendidly named Sheridan Pretty was sacrificed in the closing stages of the innings as I chased three figures (obviously it was a long time ago). Mr Pretty was not happy although he cheered up immensely when I finished up on 97 not out.

Furthermore someone who can remain nameless wasn't best impressed about being called for a rather implausible third run off the last ball of the innings. "Barker, you cunt!" was the exact term used as we just about crossed.....

Early on in my career the great Neil Bigmore assured me that it takes two people to make a run. This was particularly apt as I'd just got off the mark and he'd just brought up his half-century when a slight misunderstanding at Taylors ended his afternoon.

Not long afterwards (possibly the next over) Colin Keeley's afternoon was also terminated before he got off the mark in an incident that might not have been entirely my fault but probably was.

I could go on - unlike a number of batsmen who didn't have that chance after they'd been too slow to react to my call.

At times run outs stem from the inability of one batsman to take into account the speed of his partner.

I once accounted for the club chairman with this policy, although in fairness that owed something to the belief that he was quicker than he was. (This was also some time ago).

Judging by some of his antics between the wickets Dan Goord sometimes thinks he's batting with Usain Boult, a policy that has resulted in it's fair share of casualties over the seasons.

It could also be argued that some run outs stem from the individual's belief, nay conviction, that he is quicker than he is.

Most people look at Josh Hook and see a slightly tubby darts player with a unique running style who once lost a race to Luke Munt.

Hook checks himself out in the mirror and sees a spring-heeled speed machine capable of covering 22 yards in 0.6 seconds.

Steve Bexfield once nearly brought a fatwa down on his head at Breachwood Green after running out two of his colleagues in pursuit of a century, much to their disgust particularly that of an incandescent Rameez, who found no consolation in Bexfield's assertion that, "Sometimes you've got to sacrifice yourself, haven't you?"

Probably best to file that one under "Do as I say" rather than "Do as I've done."

Darren Lunney may have been involved in a number of incidents over the year but give him his due he will always be the one to run to the danger end and is far more aware than most that most people cannot keep up with him between the wickets.

At other times some batsmen believe that the shot is worthy of runs and will set off regardless while human nature dictates there is always a greater enthusiasm for running your own runs rather than those of your partner.

Lunney is again the exception to the rule with his selfless greyhound approach to running for others.

Theoretically it's not hard. You just shout, "Yes," "No" or "Wait" and then see how things unfurl before making sure to run your bat in at the end (or not, as Mr Ul Haq discovered to his cost against Lilley).

And yet 15 Offley batsmen have been run out this season, ten different individuals including four of whom have racked up multiple run outs.

Considering we haven't exactly been blessed with runs it seems a slightly high number.

The fact the club's leading scorer this year has run himself out three times says something.

Running yourself out trying to keep the strike in the last over is one thing.

Terminating yourself in epic style at Aldenham and Langford is something else, especially as on both those occasions Hook was the first man to be dismissed.

And yet say whatever you like about run outs, from Jon Cerasale all those years ago rushing to the bar at the Biscot Mill to get a pint in ahead of me before they run out (Cheers, Piers), from Hook's slating of Bexfield as a "selfish child" after Aldenham (not to mention the selfish child's threat to wrap his bat round Hook's head) and Wayne Cutts abusing Lunney as "a country bumpkin" after a slight misunderstanding at Therfield, the fall out is often very, very funny....