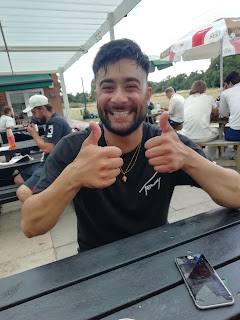 Have you seen this man?

Rehaan Samdani is wanted by NASA for his part in deliberately attempting to damage satellites by serving up pies to dangerous batsmen.

On Sunday Mr Samdani willfully conspired to send down several utterly woeful short-pitched deliveries that jeopardised the safety of a number of aircraft in the vicinity of Luton Airport and also threatened to damage the International Space Station.

Greenpeace are also calling for Mr Samdani to be investigated and prosecuted for deliberately damaging the ozone layer by allowing it to be perforated by cricket balls.

In addition to intergalactic space terrorism and environmental piracy, Mr Samdani is also wanted for questioning by the Hertfordshire Constabulary on multiple counts of impersonating a batsman.

For the record Mr Samdani is currently Offley's leading wicket taker this season.