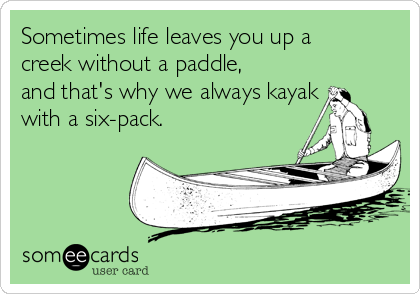 So, we're up the creek without a certain implement.

To be fair it could be argued we've been up that particular creek ever since we conceded to Chipperfield, thus beginning a run of seven defeats in eight matches that have produced a net total of 67 points.

At this point in time we've probably left the relatively tranquil waters of Shit Creek behind us and are adrift on the Ocean of Effluent with a tidal wave of the stuff about to sweep us to our inevitable doom.

However, there are still certain scenarios to be played out to dictate which division we will be in next season.

First of all it's impossible to avoid the obvious fact that if we lose to Watford on Saturday we will be dropping down two divisions, an outcome that would mean we've dropped three tiers in twelve months.

The punishment for that would be dropping into 9A and a trip to Lancaster Avenue which frankly seems harsh but if you're gonna play like cunts you've got to expect to play at a ground where tampons litter the outfield.

However, if we win there is an outside chance we could either survive or merely drop one division - admittedly that chance is about as high as Roger Piepenstock passing up a state banquet at Windsor Castle in favour of a boneless banquet at KFC.

Working on the principle that we would hold the edge with most wins in the event of a tiebreak this is what needs to happen.

An Offley win combined with eighth-placed Chipperfield taking four points or fewer against Hitchin would see us finish above Chipperfield.

James got out to a girl on Sunday.

So the point I'm trying to make is that it would perhaps be unwise to expect too much in the way of salvation here even though Chipperfield have mustered six points or fewer on five different occasions this year.

For their part Old Cholmelians would need to muster six points or fewer against Wheathampstead to finish below us if we beat Watford.

Even allowing for the fact they've been spectacularly hopeless all season and managing to lose even more games than us, that would still mean them having their worst game of the year.