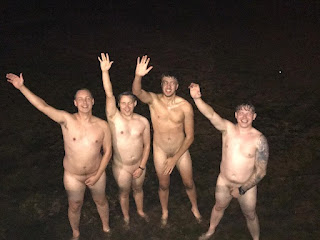 Offley & Stopsley C.C. are delighted to announce the opening of the new Offley Aquatics Centre on the site of the old pavilion.
The new facility features a shallow end in what was once the away dressing room.
The kitchen end boasts the deep end and enough water to encourage diving from the top of the kitchen worktop.
Elsewhere the site also boasts the Joshua Hook Paddling Pool for younger children who need time to cool off.
Unfortunately there are still no showers - at least nit unless the roof has also given way in the wake of this weekend's torrential downpours.
It is hoped the Aquatics Centre will also encourage wildlife - after so many ducks were seen in the middle last year there are expectations that they may make themselves at home in the pavilion wetlands.
With nets still five weeks away the opening of the Aquatic Centre means an opportunity to get ready for the new season and as the above picture shows, the Offley Synchronised Appealing Squad are already getting into action.